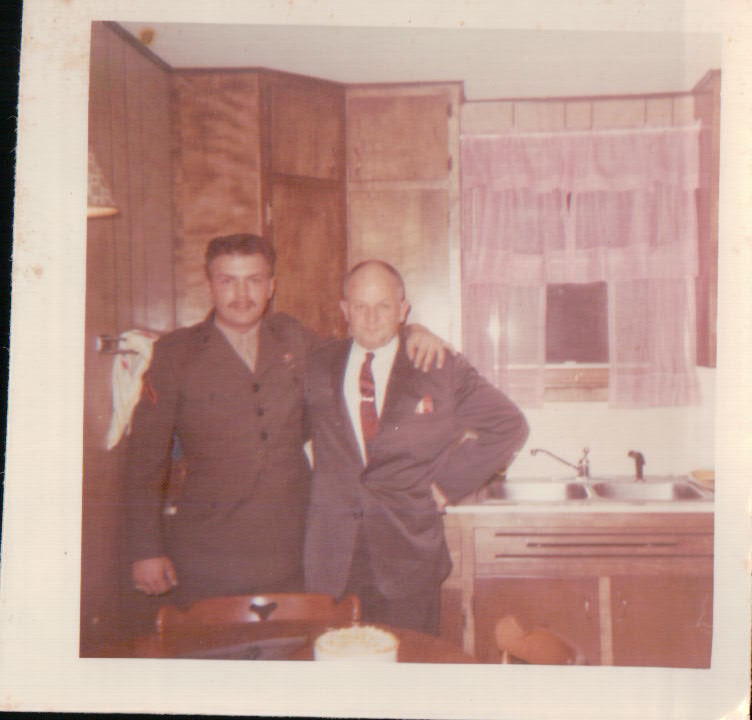 For those who don’t know, we are coming up to the anniversary of the death of Elvis Presley.

Now Elvis was the King of Rock and Roll.  This blogger is paying tribute to him.

Before Elvis became famous, he was a truck driver.  He went into a recording studio to record a song for his mother.  The rest became history.

Elvis was born in Torpedo, Mississippi and raised in Memphis, Tennessee.  He had a twin brother that died.

If you look at this picture, you might think that the younger man in the military uniform was Elvis.  A lot of people thought that he looks like Elvis.  Even when he and his family went down to Memphis.  (Enough of that)

Elvis loved his mother very much.  He even recorded “Mama likes the Roses” and That’s alright, Momma,”  for her.

When he became famous, he bought his mother a mansion in Memphis.  He named that mansion, “Graceland.”

When Elvis first started out; so did television.  He was known as being a true entertainer, that made the girls swoon.  Not only did he had the killer looks, he also knew how to shake it for them.

The first time that Elvis was seen on TV, the so-called religious leaders didn’t want the camera to show him shaking his hips.  They felt that it would too sexual.

As I mentioned in my blog, “Made for each others,”  these religious fanatic throughout history tried to control people, like Pharisees did in Jesus’s days and our government does today.

Elvis had made lots of movies in which he sang in them as well.  It was due to his manager, Col. Tom Parker.

It was while stationed in Germany when he joined the service; that he met Priscilla, who became the love of his life.  She was just a teenager, so he kept that relationship platonic until she became of age.

Some say Priscilla reminded Elvis of his mother.

Even though he dated many starlet, his true love was Priscilla.  They were married in Las Vegas.  They had a daughter, named Lisa Marie.  He was a doting father.  Lisa Marie was born in 1968.

As I mentioned earlier, the ladies just went wild for Elvis.  They loved his looks and the way he shook his hips.  Also when he  sang, it was like he was singing to them personally.  He got right down to them and sang and kissed them.

My mother was no exception for having a big crush on Elvis.  She had every records and saw every movies that Elvis ever did.  Just before Elvis died, he was in Duluth, MN.  My step-dad and brothers were up there catching smelt at the same time.  My mother was upset that she missed the opportunity of seeing Elvis perform live.  Maybe my step-dad was afraid that my mother would leave him for Elvis.

As I said in the beginning, we’re coming up to the anniversary of Elvis’s death at 42 years old.  His mother was pretty much the same age when she died.  In a way, he had this premonition that he too would die young.

Fame was just too much for him to handle.  It all happened quite fast.  He struggled with drugs as well.

Before he died, he tried to win Priscilla back.  She was the love of his life.  Actually, he was also the love of her life as well.

When he died, it was sad time in the seventies for many; especially women.  I know that my mother cried.  He died from a heart attack while in the bathroom of Graceland.

To this date, his estate is worth millions.  Lisa Marie Presley is very rich.  Sales for Elvis’s memorabilia sells like hotcakes.  Graceland is even open for tours.  The fans can also visit his grave at Graceland.

As I said earlier, Elvis was the King of Rock and Roll.  It was because of him, Rock music got it start.  Yet today’s Rock music probably doesn’t recognize him or they had forgotten about him.  He is now more link to Country Music.

Even though, these so-called religious fanatic tried to stop them from showing him shaking his hips on television; he also had gospel recording as well.  There isn’t many artist who had charted the Rock, Country, and Gospel music like Elvis did.

As said earlier, my mother had a crush on Elvis.  So I grew up listening to him.  I have to admit I even wanted to be a singer just like Elvis.  I wanted that fame and attention as well.  I even performed during lunch hours at the school.

That picture in the beginning was of my cousin, Ernie.  Some would say that he looked like Elvis.

Elvis will always be remembered.  He missed out seeing his grandkids; which he would had adored, as much as his only daughter, Lisa Marie.  Long live the KING!!